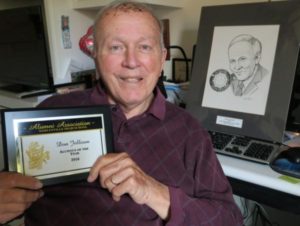 The 2016 Alumnus of the year, was awarded to Don Jellison.

Everywhere he goes, everyone seems to know the name,
Don Jellison, or to some, just plain “Jelly”.  The 1955 Noblesville
High School graduate has covered high school sports for more than 50 years.  During those years he has written about the
accomplishments of thousands of Hamilton County student
athletes.  Over the years Don has earned several awards.  He was
inducted into the Indiana High School Baseball Hall of Fame,
received the Indiana District III Basketball Coaches Award for his outstanding contributions in basketball in 1983.
In 1988-1989 ISHAA awarded him the Distinguished Media Service award and he was named to the Hamilton County Basketball Hall of Fame during the 2001-2004 season.

Don “lived and died” Babe Ruth Baseball for more than 30 years as a coach in  the Noblesville program.  He himself played baseball in high school at Noblesville.

Alumnus of the Year