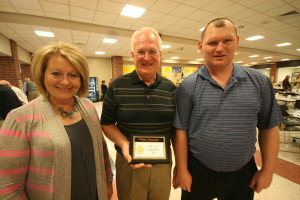 John Land is the son of Bill and Marjorie Land, Marjorie was a 1939 graduate of NHS.

John graduated from NHS in 1971 and earned both a bachelor’s and master’s degrees from Ball State University.

John has also been actively involved in the Indiana State Reading Association where he has served on various committees and served as state president during 2002-2003.

He was a 10 year 4-H member and served on the Hamilton County 4-H council, as well as, various other jobs during the annual 4-H fair.

John is married to Carol Roesler Land, who is also retiring from Noblesville Schools after 40 years of service.

John and Carol have two children, both graduates of NHS-Erik lives here in Noblesville and daughter Keri and husband Aaron live in Aurora, Colorado along with the son Easton.

John is a past NHS scholarship winner, as well as served as alumni president.